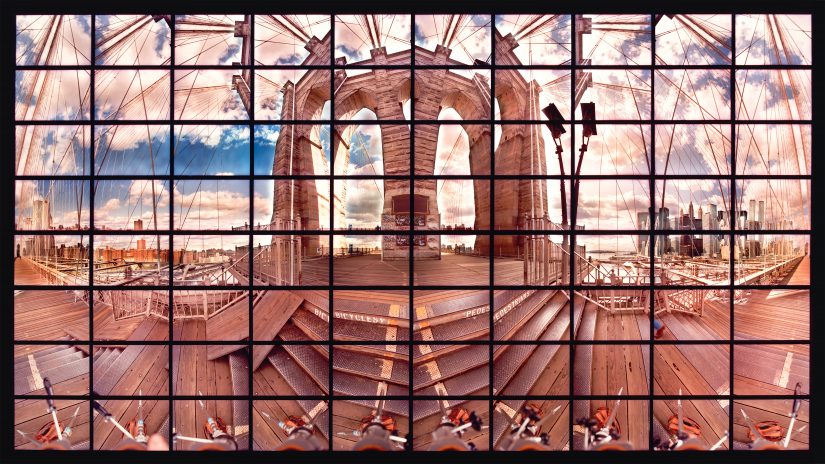 These works are primarily direct contact prints onto C-type color chromogenic paper, from color negatives. The edges of the film are removed, and each strip is taped to glass to create the gridded image. Each frame is a single 35MM film image. Each collage is made from one to five rolls of film, photographed in sequence.

I began experimenting with simple sequential strip panoramas in the late 1970’s. That soon led to the question: what happens if I do the sequences vertically as well as horizontally? I created a mechanical device to enable a camera to rotate in precise positions, both horizontally and vertically, to accurately represent a 360 by 180 degree view, or any combination thereof. I called these early works Composite Panoramic images. An image such as Brooklyn Bridge has a format similar to a Mercator projection of the Earth. Having the ability to show everything in a given location in one single flat photograph, these images are a conceptual precursor to QTVR virtual reality. In fact, I applied some images to the exteriors and interiors of spheres to create an analog virtual reality experience on a small scale.

Before long, I abandoned the mechanical constrictions of the rotation device and began making the images ‘freehand’. This required some planning ahead, as there is virtually no post production editing allowable with this process; the film comes out of the camera in sequence, as shot. Shooting by hand did allow for greater creative control, shaping images as I desired, and the inevitable mistakes and variations added to a looser, more spontaneous feel.

The images in this series are printed in editions of 10 to 25.

Go back to Early Collage.